A village needs survey in 2001 identified a shortage of sports facilities in Crick.  Crick Parish Plan covering the period 2002-2007 subsequently devised by the Parish Council ambitiously sought to establish a new sports complex to meet the needs of the population.  In June 2004, the Parish Council bought a large area of land from the County Council which was surplus to requirements following compulsory purchase orders to facilitate the construction of the village bypass.   Prior to the purchase, planning permission was sought and granted for a change of use of part of the land from agricultural use to sports field.  Crick Community Sports Centre now occupies this land with the remainder of land bought now forming Jubilee Wood. 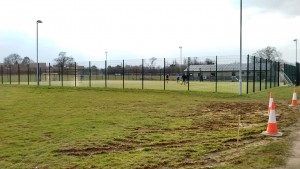 Following the purchase of the land, the Parish Council approached various sport organisations in the village to realise its plan and eventually CSFA was formed.  Various technical studies were undertaken to establish the feasibility of the project and to devise a plan.  The main problem was funding; attempts to secure grants and sponsorship failed especially with the start of the recession looming.  Planning permission was renewed in 2009 and a more detailed consent applied for in July 2011.  The breakthrough was the first Sport England grant awarded in late 2011 towards the construction of the football pitches and car park.  Following this, grants were subsequently awarded by the Football Foundation and Daventry District Council.  CSFA, Crick Athletic Football Club and Crick Parish Council provided the remainder of the monies needed for the first phase.

Construction commenced on 11th June 2012 and White Horse contractors transformed a very boggy cow field into the superb well drained sport pitches that we have today.  The doubters stopped doubting and belief in the new facilities started to gather momentum.  The pitches were in use from Summer 2013. 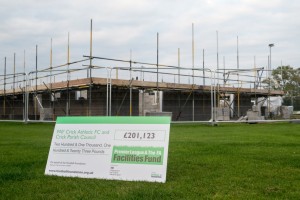 Construction of the MUGA (Multi Use Games Area) or astroturf pitches commenced on 7th July 2014 following funding from Sport England awarded the previous year and £75,000 S.106 contribution from David Wilson Homes as well as another grant from Daventry District Council together with other monies from CSFA, Crick Lions and Crick Athletic FC.  The MUGA was operational in October 2014 following the installation of an electricity connection to the site funded by the Parish Council.

Phase 3, the pavilion commenced construction on 24th August 2015 following a successful football foundation grant in excess of £200,000.  The remainder of monies being a S.106 contribution of circa £115,000 from Barratt Homes, a further grant from Daventry District Council and various monies from CSFA, Crick Colts FC and Crick Parish Council.  Practical completion was reached on 18th March 2016 and the building has been operational since this date.

There are many small projects that need to be completed such as posts around the pitches and the erection of ball nets to the junior football pitches.

Phase 4 is under construction and that will provide a cricket pitch at long last for the village and is well deserved by Crick Lions who have been stalwarts of local fund raising for the whole sports field project.  It will also provide 2 youth football pitches that are desperately needed.  Unfortunately, all grant applications have been unsuccessful and so it is a self-funded project albeit with help from Crick Parish Council and a Northamptonshire County Council youth grant.  Consequently, we can’t afford to install drainage at the present time but such works are meant to be retrospective in any event and hopefully future grants will be successful in this regard.  Construction commenced in earnest Mid-October but following excessive rainfall, works were unable to continue until April 2016.  The new pitches should be playable in 2017.